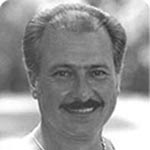 In 1968, I drove my motorcycle to the Auburn Dam to go waterskiing with a friend. When the boat motor failed to start, I volunteered to ride my bike to get a new spark plug. I had gone a mile or so on a narrow, rough macadam road when I came to a hill with a sharp right curve. That is the last thing I remember. Several days later, I finally awoke in a revolving hospital bed. The doctors were trying to get circulation into my left leg, in order to save it from amputation. I also learned the doctors were considering amputating my right arm because it was missing tendons and muscles. Eventually the doctors had to amputate my left leg. Not being aware of too much through six (6) operations and a 104-degree fever, I finally awoke to some form of reality. That is when I found out that I almost died in the emergency room. I had an almost head-on collision with an Oldsmobile 88. Witnesses said I was thrown 45 feet into the air. When I landed, I was disemboweled and bleeding profusely from my abdomen, my left arm and my right leg. My left leg was smashed.

Back in the mid-60s, there was no EMS service as we know it today It took over an hour and a half for the volunteer ambulance to get me to the hospital, and because of the long delay, I had no pulse, only a heartbeat. I was later told that I had lost 90% of my blood, and that my surviving was nothing short of a miracle. In order to give me transfusions, the doctors had to cut the ankle of my right leg to find a vein. I was told that I received more than 40 pints of life-sustaining blood. I had often donated before my accident, but after my accident I learned first-hand how important donating blood really is. Once I regained my health, I began donating on a regular basis, and am still doing so today. Every single day, I am grateful to those who gave their blood. In doing so, they saved my life. They are heroes.

Give the Gift of Life with Shoemakersville Fire Company!